Google Wifi vs. Nest Wifi which mesh router is right for you 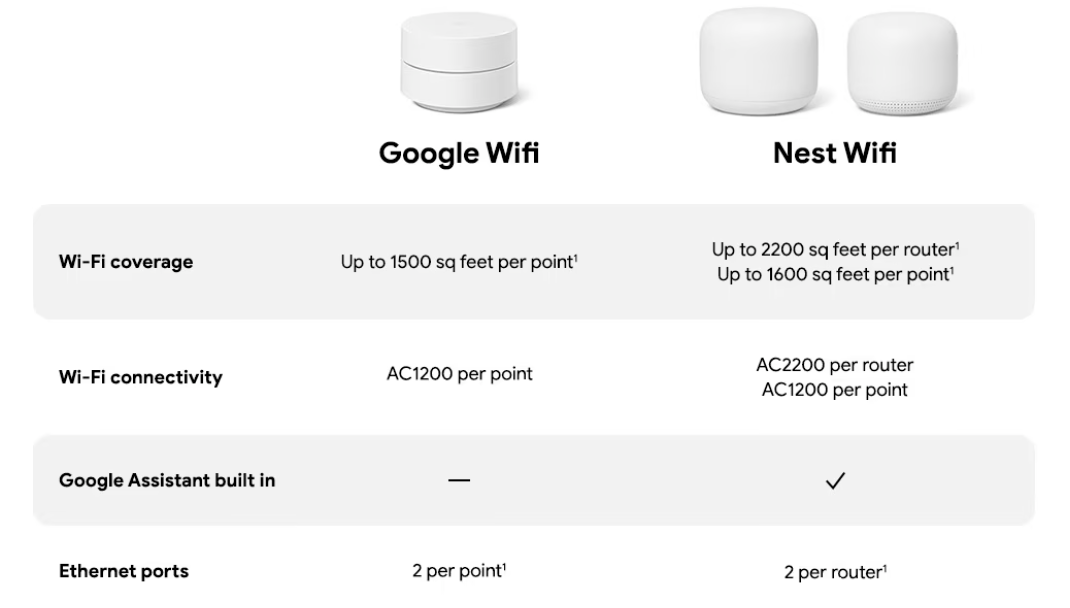 You want to know what the difference is between Google Wifi and Nest Wifi? Is it worth upgrading from Google Wifi router to Nest Wifi? Which one should you get if you don't have one?

Major difference between Google and Nest Wi-fi is the coverage Google Wi-Fi's each point covers 1500 sqft however newer Nest AC2200 has coverage of 2400sqft. Old Nest Wifi model has 1600 sqft coverage.Each Google Wifi AC1200 point has a Ethernet port where as Nest AC2200 has only one port for one of the points.

Just to be super clear on the differences between the Google Wifi and Nest Wifi, Nest Wi Fi is a newer version of Google Wifi with more coverage range. Google is now going to merge in Nest.

Google bought Nest several years ago and now they're merging the the router brands into Nest product line, some of the products are going to be called Nest now. And some are going to stay as Google. Nest Wifi comes with built in Google mini also called as Google assistant. So Google Nest can control doorbells,lights etc.

Let's find out what the difference is between these two which one you should buy. We will answer some of the questions you have. One of the big things that people are asking about is why should I upgrade or get the Nest Wi Fi? Is it really that different than the the Google Wi Fi, which is about $69 more expensive than Google Wifi?

Google Wifi and Nest Wifi comes with world class parental control built in that can be easily setup with Google Wi-Fi app.

This is than the Google Wi Fi. You also get three points in Google Wifi. Now you might think Nest is not a good value. So I want to dig into these differences. I want to let you know what the major differences are so you can decide for yourself which one is best for you or is there another one better for you? So on the Nest and Google mesh Wi Fi let's discuss about this for a quick second. Nest Wifi got a brand new design. It's got this beautiful modern dome kind of look with ring lights.

Ring of a light underneath Nest Wifi is kind of glows on the shelf and does not shines on your eyes. when lights are on, It's not like in your face. lights beaming across the room like sometimes the Google Wifi would not.

each unit in the Google/Nest product is called points. Some routers call them satellites. It's the mesh system. So you have your router and then you have a point, the router connects to your modem. And then it distributed internet out to any points you have 1,2,3 or 4, however many you have.

With Nest in the point, you get a Google Assistant. So basically instead of having to buy Google Mini or Google hub or Google Home, whatever you had to buy before to get that you have one built into your points. So you can ask it like Google. What's the weather Google Play music, play a podcast pay to play an audio book, whatever it may be. You can do that. And it's pretty cool. I mean, Google Nest looks really slick.

Neither Nest or Google does not have Wifi six, that's a huge downside. But if you're under about 350 megabytes from your ISP, if you're only getting about 300 Mbps or lower, Google Wifi is perfect for you. Google Wifi will work for you. Google Wifi says it give you 1500 square feet per point. It does not so if you have a house has multiple levels then it gives around 1000 square feet, you need to get the three back of this or you will see speeds drop especially if you're at those higher rates like 400 Mbps. You're definitely want to spread that out a little bit more to handle more devices.

The other downside of Nest Wifi compared to the Google Wifi legacy, Google Wifi has the Ethernet ports on the Google Wifi point, in the box you got a router and then you've got two points, or two satellites, however you want to look at it. So your routers connected to your modem and then you get two points to sit around your house that kind of distributes out the Wi Fi and the load of devices are using things and so each of these points and the router have an Ethernet connection.

Google Wifi advantage with extra port, So if your house is hardwired for networks, you could plug in all three of the points hardwired to your modem. So you could connect each point in your the modem and plug it in. You could set number two in the living room and plug it in. you could set number three in the office and plug it in and they all three would be gaining their most of their Wifi connection. Even though they still talk to each other the gaining directly from the modem source, which will increase your Wifi speeds because now you're distributing data directly over wire. Basically from three different routers almost across the house. On top of that, you get an extra Ethernet port or RJ 45 for those technical people. You get one extra port in all three points.

So say you have a PlayStation or something that's not Wifi, say you have an older device does not have Wifi but does have an Ethernet port. You can actually plug it into one of these and it turns it in to Wifi receiver as well as a point. If it's not near a hardwired connection or near the modem. This is a huge benefit for a lot of people.

The huge downsides to the brand new Nest Wifi is they for some reason eliminated extra Ethernet port on points and you get zero connections, except for the electric plug wire in to your points. Most people in today's world are not going to worry about that as most things at this point are Wi Fi enabled. Printers, phones, computers, cameras, whatever it may be. So it's not a huge deal. But I want you to know it because some to some people, it really is a big deal. And you need to know that if you're going to spend that kind of money, get home and find out oh, it doesn't have what I need.

Google was going to deprecate they were going to erase the Google Wi Fi in place of the Nest Wi Fi. They decided they saw this as an upgrade, and they didn't think it needed to stay around. And a lot of people gave Google a lot of feedback.  Google Wifi is back in the Google Store and it's starting to show up in Costco, Best Buy and Amazon again.

Now you have an option to buy the Google Wi Fi or the NES. What does that tell you? Well, the Nest has had some issues, like performance issues, Nest Wifi doesn't have Ethernet connection. You need extra ports, I would still go with the Google Wi Fi.

The cool thing is, is they're compatible with each other. You can hook up one of this router and the and then hook up the point that comes with this router and an outcome all three of these as points in your system. And then you've got four points and a router. So that is really cool that Google did , Google and Nest Wifi are backwards compatible and compatible with each other. And the app for both Nest and Google Wifi is super simple. It's one of the easiest routers to set up. It walks you through it visually. Step by step so you have no issues there. It's very intuitive. So that's the major differences between the two routers.

Really the big change is look and feel and extra coverage you now have a many Google assistants in here. So that saves you another 50 bucks or so that you would have to spend 50 bucks and the look is really nice. Nest Wifi has much cleaner and a better look.

If someone came to me and they wanted they were like between these two, which one would you get? I would go with Google Wi Fi because I trust it. I've used it for years. It's easy to set up my parents use it my grandparents uses so many people I know use it. It's just super easy. Now if you have speeds higher than 400 Mbps, You're getting on up there maybe a gig. Nowadays you can even get like 1.5 or two gigs.

I hope this helps you. I hope this makes you feel like you understand more of the differences between the Nest and Google Wifi and what's better for you. And if you are in apartment or somewhere in small like a two bedroom apartment, you really only need one point and router of these and you can just get the it for $99.

If you're a Costco member and your house is bigger than 5000sqft, Costco have a four pack for really great price. So you can always check there. And of course Amazon and Costco have an amazing return policy. Walmart and Target are horrible at returning Google products. They're very strict return policy. So be sure if you're on the edge to buy it from someone that has a really good return policy.